Questions About Rugs and My Best Advise! 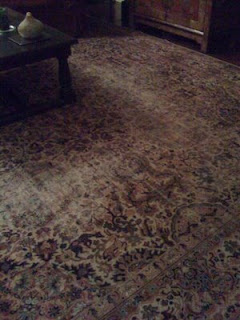 I recieve many emails from people far and near and so I've decided to post the questions and my responses so that the information is available to one and all. Here's the most recent:

"I saw your web site and you seem to be knowledgeable about rugs. This is my carpet. I've been told by my rug cleaner, one of the few guys who still cleans by hand in Los Angeles, that this rug is over 75 years old, Belgian, and probably machine made. I really like the rug, but as you can see, the wear is getting bad. Is a rug like this worth restoring? Can a rug like this be restored? I love the aged look of it, but I think it's a little TOO aged. One of his guys offered to "color" the bald spots. If the rug isn't worth that much, is that a way to go - or will it look painted? Any advice you could give would be most appreciated."
Melanie Graham
My response:
Dear Melanie,

There is really no investment potential in older machine made rugs. If they are in perfect condition, there is some value there, but never as much as a good hand-woven rug.

Babylon rug cleaners on Westerm in Los Angeles is the best one that I know of. Link below.
http://www.babylonrugcleaners.com/
If they can put a bit of the color back where it's worn out, it may look better for a while but don't spend a lot of money on that. These guys are the best in LA and VERY fairly priced.
If it's clean now, my best recommendation is just to arrange your furniture so the worn spots don't show and use it until you are done.

Machine woven rugs cannot be restored. You are right, it is a very pretty rug.
Hopefully this helps.

What's up with Sebastopol? Sebastopol, California. 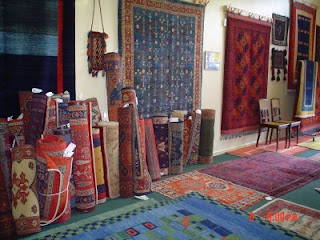 Just found a cool article about Sebastopol so here's the link.
http://outside.away.com/outside/destinations/200608/best-outside-towns-2006-5.html
Of course, my Oriental Rug Gallery, Paradise Oriental Rugs is in Sebastopol, just in case you were thinking of a visit.
I will be at the Healdsburg Antique Show August 30, 2009, Downtown Healdsburg in the Park! Show hours: 8 AM - 4 PM
Bringing some beautiful rugs and a few antique tribal pieces so it should be fun!
The show is free to attend so hope to see you there!
http://www.paradiseorientalrugs.com/
Posted by UnderCoverRugLover at 9:40 AM

The founder of this organization, Lawrence Anthony is not only a fascinating individual, he is also an uncommonly brave and dynamic human being that we all could learn from on the subject of integrity. What is integrity but doing what you know is right, regardless of the outcome to yourself or your personal needs and comforts.

Being the first civilian that entered Iraq after the start of the war, his mission was simple. Rescue the animals in the Baghdad Zoo. With little resources and sheer guts he was overwhelmed when he arrived to discover only 35 starving, dehydrated animals left on the brink of death from a former population of 600. No water, filthy cages, broken pipes destroyed by bombs...the question was where to start. This is an amazing story of hope and inspiration that shows what ONE individual can do to make a difference.

Here's a hint. Not one animal died after his arrival. This book is a must read.

Enjoy and if you want to help, get involved, make a donation, do whatever you can. It's our planet and none survive alone.
Our Founder

The name of the book is Babylon's Ark by Lawrence Anthony with Graham Spence.
Posted by UnderCoverRugLover at 11:50 PM

Amazing Camel in Downtown Sebastopol on Thursday in front of Paradise Oriental Rugs! 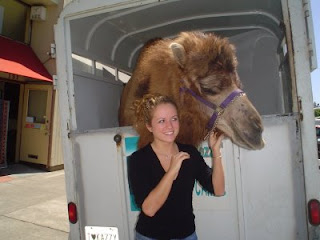 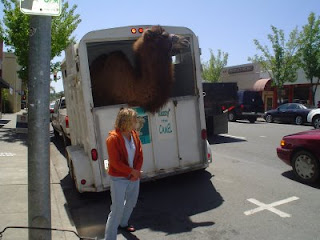 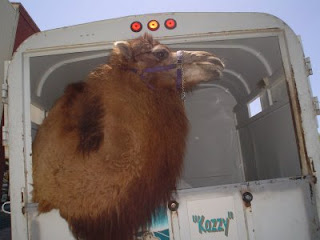 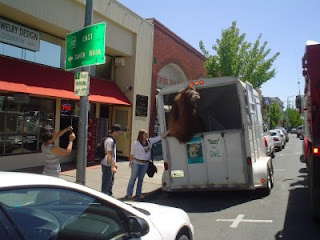 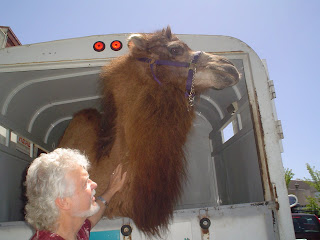 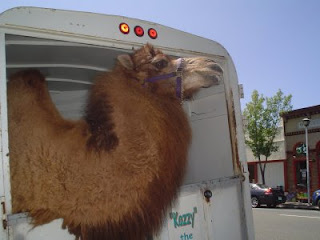 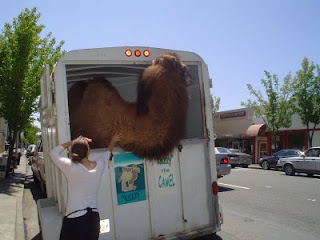 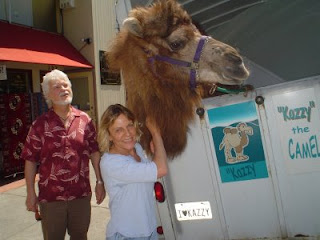 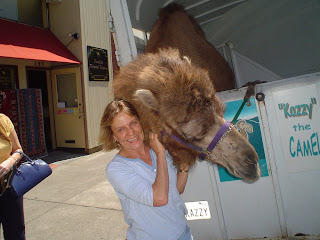 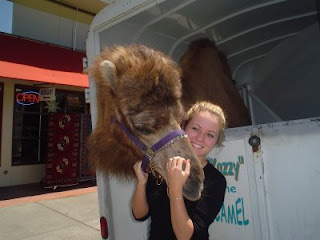 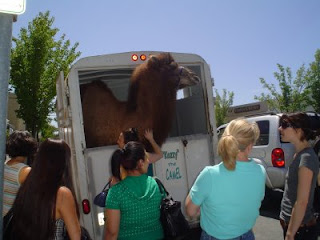 I arrived to work yesterday and there was a large trailer parked in front of my rug store. I didn't think twice about it until someone asked me, "Is that your camel?"

I was busy on the phone and getting set up to open when it was pointed out to me by one of my neighbors on Main Street, that there was a real, live camel, parked in a trailer, directly in front of my rug gallery.

I waited patiently until the caretakers of Kazzy returned as I had no idea if she was friendly or even how to approach her. She appeared to be completely relaxed with cars going by and one and all, magically pulling out their digital cameras, including me! When her owners returned, I was amazed to find out she was a therapy animal from Lyon Ranch in Sonoma County and was in between visits to convalescent hospitals while her owners were out to lunch.

When they returned, I was offered the opportunity to meet her along with everyone else! She was so sweet and affectionate, it was fantastic! I asked many questions and found out Kazzy is one smart camel. She is trained and works as a therapy animal bringing smiles to the faces of all she meets. She's particularly fond of men with beards, I was told by her owners, but friendly to all and truly enjoys her work as a therapy animal.
Posted by UnderCoverRugLover at 6:19 AM 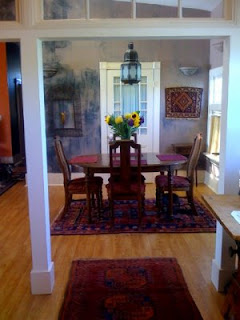 I do believe this is a beautifully created space and recently received this photo in an email from one of my loyal clients. The three rugs you see here were purchased at my gallery a little less than a month ago, so I was thrilled to see all.

The faux finish wall with the blue hues bring this whole dinning area together and speaks to me of Greece or Italy, reminiscent of days gone by. I think it's just stunning with the old rugs. Another facet of this space is that it remains interesting as one continues to look over all. She has kept the space open, allowing the wood floors to add an elegance while still retaining a very individual quality with her signature look.

The rug you see under the dining table is an old Kurdish rug with deeply saturated colors woven is a bold tribal design with a whimsical quality. This piece was quite dynamic in it's large scale geometric drawing and smartly, she has given it breathing space. The last rug I will comment on, placed right at the entrance to the dining area is an old Ersari Turkoman. It was slightly faded but still smiling. This little charmer was one of my favorites as the wool had a beautiful sheen (antique patina) and the rug was quite charismatic. Notice that each piece is a different size but the overall look of the room is balanced.

Just thought I would share, as this space was created with three antique rugs, all of which were somewhat different from one another. What she has achieved here is harmonious and contemporary, while still retaining an old world charm.

Posted by UnderCoverRugLover at 2:36 AM