Video of Persian Nain and Isfahans! 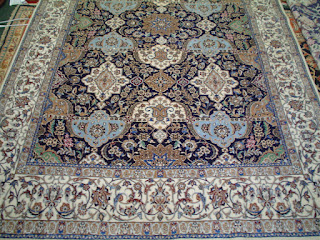 As promised, here is a video of three of the very finely woven, wool and silk workshop rugs now available
at my gallery. http://www.youtube.com/watch?v=szvU6exGhPU
Posted by UnderCoverRugLover at 12:06 AM 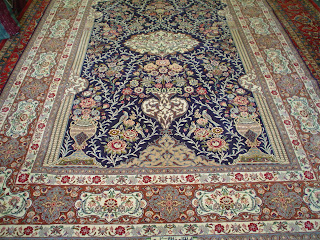 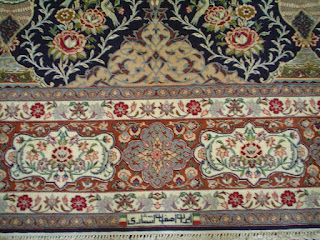 Well, well, looks like the rug Gods smiled on me this week.  Recently acquired a number of beautiful, very finely woven rugs which I have just put up on my web site. Persian Isfahans, one lovely Nain and a couple more formal  Bijars.  They are a bit different from the tribal rugs I normally offer but rugs of merit in their own right.    My gallery pages!

To give you an idea, the above Isfahan has over 500 kpsi (knots per square inch) with the wool knots tied onto a silk foundation.  Additionally there are silk accents throughout this piece.  The design detail is fascinating. If you look the rug over carefully you will see the basic design is that of a prayer rug, with the pillars skilfully blended into the minor borders enclosing the vase design.  This Persian Isfahan was signed by the weaver and is my favorite of these recent additions.  I will be doing a video of all the new rugs in today, so look for it on my My You Tube Channel. in the immediate future.
.
Posted by UnderCoverRugLover at 7:18 AM

Well, well, today was a good day. Actually two of my prized rugs were returned by Pamela Hiller, the "go to" gal for rug repair here in Sonoma County (actually the Bay Area) and I was pleased as punch!

I have a new dog you see and he has only been with me for a few months.  He is not perfect but almost.  He is still young, being about 18 months old.  He was pretty much thrown in the yard and forgotten about before I was lucky enough to become his new owner and best friend. He came into my life in early December.

He was picked up on the streets of Santa Rosa literally starving to death, with a pretty severe case of kennel  cough and an ear condition called fly strike whereby flies had eaten much of the hair at the tops of both ears.  He was weak and could barely eat.  This was his condition while he languished at the Santa Rosa Animal Control.  He had not been to a vet and had been there two days in the "found dogs section" when I saw his photo on their site. Apparently, they were backed up on their vet visits so I knew that I needed to move quickly. He was not available for adoption immediately as there was a  wait period for the owners to have a chance to get him back, he was sick and not neutered. The owners never came. I checked the site daily and the moment the wait time was up moved into action.  From that point forward, getting him out of there was the ONLY thing on my mind.  Sometimes you just KNOW.

I called my friend Nancy at Countryside rescue here is Santa Rosa.
Countryside Rescue, Santa Rosa, CA
I requested her help as she had told me earlier on, after my dog had passed away, if there was a dog at one of the pounds she could pull it for me. She knew I loved German Shepherds.  Poor Nancy, I was calling her 3 and 4 times a day. Her help was right there but she was trying to connect with the person in charge to get him released.

I had been up there 3 times and the 3rd time was the charm. The senior person in charge was now working and it was a go!  When I met this guy, I felt waves of love for him...like a long lost friend.  He was sick but still waging his tail, sniff, sniff and very friendly.  Probably getting too myopic here but believe me, nice dog!

My new nameless dog was now with me and we were at the vet the next morning.  The attendants at the pound had guessed his age to be about 3 but they were totally off.  Both vets at Wikiup Veterinary   indicated he was about a year and a half old and definitely a pure bred German Shepherd Dog.  He weighted 64 lbs, nose running, coughing, weak and was sleeping about 20 hours a day. We got fantastic care at the vet and his health started improving immediately.  I was a bit "not there" at work for a few days, just to ensure he was going to pull through and he did like a champ!

I waited to name him as I wanted to see what he was like and get to know him better.  It came to me when we were out in the yard and he floated across the grass with his beautiful gait.  This was after about a week and he was starting to recover....never seen anything quite like it.  He looked so regal his name could only be  Prince!

Prince likes to chew.  He is now fat and sassy, not really fat but has gained weight (85 lbs!) and fully returned to heath. If I had to pick one word to describe him it would be "cheerful".  What a sweet guy!  He did not even know how to sit, if you can imagine that but luckily was fully housebroken.  His nickname is chewy but he is learning.

So, yes, he did chew the edges of two of my prized rugs but they have been fixed.
Here are some photos of the before and after on one of the rugs Pamela repaired.  Great job Pam!  I'll include her link for those that may have a dog issue!  And my beautiful Prince below...
Pamela Hiller, Oriental Rug Restoration! 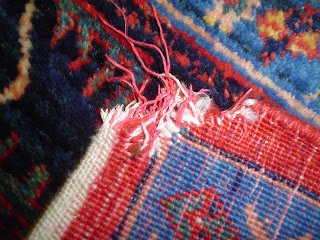 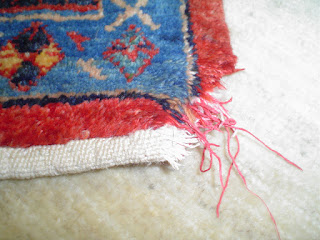 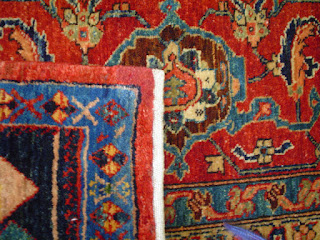 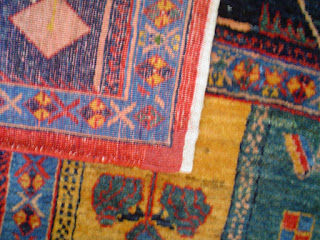 Here is Prince early December, 2011.  He was very thin.  I had to put sheets down
on my rugs as his nose was running severely. 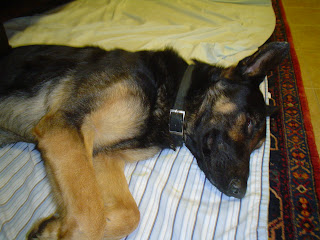 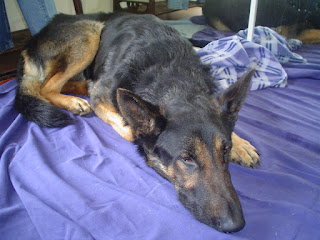 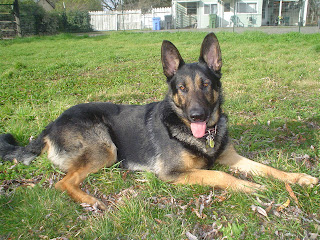 Posted by UnderCoverRugLover at 4:20 AM